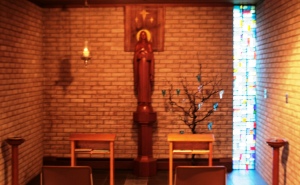 Mary has been both deified and vilified. It seems the main reason she has been vilified is precisely because she has been deified. The dogma of the Assumption of Mary into heaven, traditionally celebrated by Roman Catholics on this day, tends to suggest deification and thus provoke a corresponding denigration. Why should this particular Jewish girl be raised to such heights? Sound theology has always been clear that Mary was a human being and not a deity. Any glorification of her is a glorification of her divine son who gave his mother whatever glory that she has. Like the rest of the world, Christianity has had its superstars who are put on a pedestal and everybody on a pedestal draws detraction as a matter of course.

Mary’s real glory is that she was a human being every much as the rest of us. That is, she was and is a Jewish girl. Mary is, of course, inseparable from the Incarnation of the Word in her womb. Although Mary’s son was (and is) divine, Jesus was (and is) fully human, like you and me. In his excellent book Sheer Grace, Drasko Dizdar says that Mary, far from being a deity or demigod, “is the utterly and simply human subversion of this deification of human “archetypes” into the divine feminine.’” This is what the famous words of Mary in the Magnificat are all about when she says God “has cast down the mighty from their seats and has lifted up the lowly.” If such words simply mean other people become just as mighty as the ones who were cast down, then the words change nothing for humanity. The ones who are raised up are lowly and continue to be raised up only by remaining lowly. The proud are scattered in the “imagination of their hearts.” The rich are sent away empty because their hearts are too full of their desires to have room for God. What is so subversive about Mary, then, is her humanity. While other humans try to make themselves more than human by being movers and shakers, Mary is blessedly content to be human. As Dizdar says, Mary is a whole human being “as God has always intended the human creature to be as creature.”

Throughout, the Magnificat is a song of praise of God, not of Mary herself. All generations call her blessed because of what God has done. Mary only did what every human being should do, rarely as it actually happens: She said “Yes;” she didn’t say “Maybe,” or “No.” Saying “Yes” is what is so extraordinary about Mary. If this simple response makes her so singular among human beings, it only shows how the rest of us fail to be human beings. Far from isolating herself, Mary proclaims her solidarity with all God’s people, the promise made to all Abraham’s children.

Does all this relegate the belief in the Assumption of Mary to mere mythology that must be discarded in our modern age? Not at all, if we open our hearts to the Love God shows to the created world in its sheer materiality. Dizdar says that God’s love “is so concrete (‘body’) and complete (‘and’ soul’) that it draws into itself (‘assumes’) our happily (‘blessed’), sovereignly free (‘virgin’) and simple, created humanity “(‘Mary’), into the very life of God (‘heaven’).”  If we glorify Mary for an allegedly singular grace or denigrate her for allegedly getting “special treatment,” we only show how readily we project our rivalrous desires on Mary and God. Far from being a special grace, the Assumption is God’s invitation to all of us to enter the depths of our created humanity that God loves unconditionally.