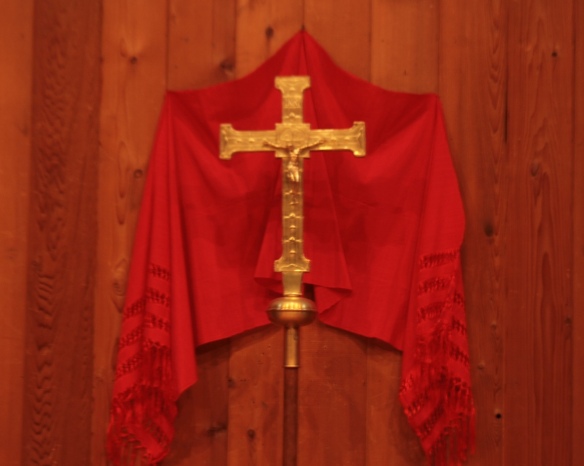 The transfigured light that radiated from Jesus has inspired many as an image of our potential for holiness. Some Eastern Orthodox spiritual writers such as Gregory Palamas and St. Seraphim of Sarov believed that they saw the light of Mount Tabor within.

Jesus’ self-designation “the Son of Man” is also rich in possibilities for humanity. Walter Wink famously suggested that the phrase “Son of Man” refers to a newly created humanity in Christ. This fits well with St. Paul’s use of the phrase “New Humanity” in Romans 5. For the likes of the disciples and us entry into the new humanity in Christ is not smooth sailing into transfigured light. The disciples quickly return to arguing about who is the greatest. We all know the anger and other discordant feelings that overtake us quickly every time we sense any hint of the transfigured light in our lives. Even Moses and Elijah were both compromised with violence which they had to overcome in the same way we have to overcome our own violent impulses, petty as they often are.

Jesus’ transfiguration is linked to the journey he is about to make to Jerusalem and we know what happened to him there. Jesus was transfigured, then, because he was willing to die in Jerusalem if that turned out to be necessary for opening the way to a new humanity. Jesus tells his disciples as much when he admonishes them not to tell anyone what they have seen until “the Son of Man has been raised from the dead.” (Mt. 17: 9) At that time, Jesus opened the way for a new humanity that would not require human bonding through the death of one for the sake of the people as Caiaphas would have it, but a new humanity that would join in seeking for even one lost sheep, strenuous and dangerous as such seeking could be, and then rejoicing when that sheep was found. (Lk. 15: 3–7)

That the Transfiguration takes place on a mountain recalls Mount Sinai, where God began the renewal of humanity. The first Commandment that “you shall have no other gods before me” and the last one “you shall not covet” cover our relationships with God and neighbor and create a sandwich with the eight other commandments. More recently there is the Mount where Jesus preached his sermon to renew humanity through non-retaliation and forgiveness, precisely the human qualities Jesus himself showed as the risen forgiving victim. This is the transfigured light that shines in the darkness so that the darkness cannot overcome it. (Jn. 1:3)

See also: How is the Gospel Veiled?  and The Transfigured Glory of God’s Children

The parable of the lost sheep crystallizes the Gospel as only a few others do.  It reverses our usual outlook that naturally tends to think along utilitarian lines where, as Caiaphas suggested, it is better for one person to die than the whole nation should perish. From the dawn of time, sacrificial logic has worked the same way: one person dies so that the community can be at peace, at least for a time. Jesus coyly asks the question: “which of you, having a hundred sheep, wouldn’t leave the ninety-nine to look after the lost one?” The honest answer would be: Nobody. A lone shepherd couldn’t leave the ninety-nine without losing them and probably failing finding the lost one as well. And yet Jesus asks the question in such a way as to ridicule our normal way of thinking and then goes on to rhapsodize about the extravagant joy and celebration at finding the one lost sheep. It’s the same with the woman finding her lost coin. She throws a party that probably cost all ten of her coins.

This rejoicing over the lost sheep and the lost coin and the lost sinner shakes us up into realizing that it is not enough to renounce the sacrificial logic of Caiaphas. If we stop sacrificing people we think are expendable that is something but much more is asked of us. We are to actively and sacrificially care for the ones who are lost, who are considered expendable by society. In his Rule, Benedict writes powerfully about this parable in the context of a community dealing with a delinquent member. As I say in my book Tools for Peace, “Benedict captures the inner spirit of the Gospel by picturing the abbot throwing off any sense of abbatial dignity in much the same way the father of the prodigal son throws off his dignity by running out to greet the son he sees from afar.”

One might think that the good shepherd is sacrificing the ninety-nine sheep for the sake of the one. Maybe. But what really needs to happen is for the shepherd plus the ninety-nine to go after the lost sheep. In his chapters on dealing with a delinquent member of the community, Benedict turns the whole community into shepherds. Paradoxically, one of the ways (and a problematic one) is excommunication where all members must cooperate. It is important to realize this is intended as a means to reconciliation; sort of like a time out in a family which gives a trouble child an opportunity to reflect on his or her behavior. Moreover, the whole community shares the pain of the alienation. Benedict doesn’t leave it at that. He suggests that the abbot send wise monastics to comfort the excommunicated member and reason with him. Benedict then encourages the best remedy of all: prayer. This is a communal effort with the whole community praying for the one who is temporarily lost in the hope that this member will soon be found again. Reconciliation takes place in the monastic church, making this also a communal event.

Benedict gives us one example of living out a difficult scenario. In each instance, we have to find different means to the same end although Benedict’s techniques give us a sense of direction. In the Body of Christ, all of us are called upon to act the part of the good shepherd.