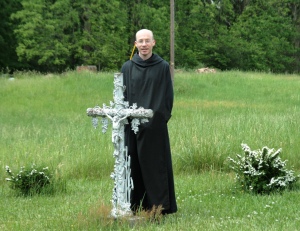 The strongest tension in the New Testament is that between the teachings of non-retribution and forgiveness on the one hand and eschatological retribution threatened for those who fail to follow the way of forgiveness and non-retribution on the other. The first problem is that it sets up a double standard between God and humans. We should be meek and mild but God will throw the bad guys into unquenchable fire where there will be wailing and gnashing of teeth. The second problem is that Jesus’ accepting death on the cross turns out not to be the ultimate revelation of God that Christianity usually teaches; violent retribution at the end of time is the last word. The third problem is that if violent retribution on the part of God is the last word, the hard practice of non-retribution doesn’t seem to be worth it.

David Neville’s fine book A Peaceable Hope is an indispensable examination of precisely these issues. He sees the divide primarily between some parables and some retributive sayings in Matthew and pretty much the rest of the New Testament. The tension, then, is strongest in Matthew since it includes the Sermon on the Mount and a stress on Jesus being the silent lamb led to the slaughter but also has many threats against those who do not live by these standards. So lopsided a division suggests that the weight of the New Testament as a whole comes down firmly on the concept of God as totally without violence. Neville draws the tension in Matthew and contrasts this Gospel with the three other canonical Gospels, all of which are strongly peaceable in its eschatological teaching to various degrees with John being the strongest on peace themes. The reception history of Revelation has often taken the book to teach retributive violence by God but Neville builds a strong case that the slaughtered lamb is the guiding image for the book as a whole.

Neville doesn’t try to speculate why Matthew would have as vindictive an eschatology as he does. We can make some educated guesses based on our own experiences with rejection and injury. If we can’t or won’t strike back, we like to think somebody bigger than we and our adversaries will come and tear them to pieces on our behalf. There are alternate ways of understanding these violent passages in the New Testament, among them the suggestion that they use firm imagery to show the consequences of rejecting Christ and Christ’s way. Raymund Schwager, for example thinks along these lines in Jesus in the Dram of Salvation. In such a reading, God is not actively acting out revenge on those who reject him; they are suffering the alienation and violence by which they have lived.

Neville’s careful and thoughtful exploration of this difficult issue is valuable for anybody who wants a firm biblical basis for believing in and teaching a God of peace.