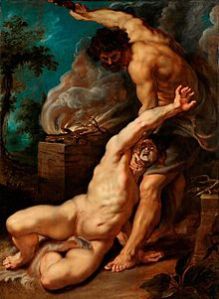 In Creation God blesses humanity with all that God has created, but humanity rejects that blessing for the sake of one tree that then shrank to a barren landscape. To begin the process of re-gathering a scattered humanity after the Tower of Babel, God calls Abraham to leave his father’s house, i.e. the scattered, rivalrous civilization he was born in, and move to a land God will show him. When Abraham leaves the entanglements of mimetic rivalry behind, whole new vistas of possibilities suddenly present themselves.

God then tells Abraham:  “I will make of you a great nation, and I will bless you, and make your name great, so that you will be a blessing” and by him “all the families of the earth shall be blessed.” (Gen. 12: 1-3) We are so habituated to getting (or taking) blessings that we often fail to notice that God said Abraham would be a blessing and a blessing not just for him and his household but for all households. The intervening verse that God will curse those who curse Abraham is discordant. If God really is in the business of blessings, then God is not in the business of cursing. After all, Jesus did not curse those who cursed him and worse. However, we could say that when we curse someone who is a blessing, and through Abraham everybody is a blessing, then we are consumed by our own cursing.

We see all this already at play in the story of Cain and Abel who fight over a blessing and the supposed lack thereof. Genesis does not tell us why God accepted Abel’s sacrifice and not Cain’s. Girard’s theory of collective violence founding culture leads me to suggest that tilling the ground was a factor. There could have been mimetic rivalry among nomadic herders of sheep but tilling the ground like Cain was all the more conducive to rivalry over particular plots of land, such as Ahab’s coveting Naboth’s vineyard. The proliferation of vegetative dying and rising deities in mythology suggests that landed economy lead to mimetic crises and their resolution through collective violence. On the other hand, when we note the alleged zero sum blessings in the fratricidal strife that follows, maybe Cain jumped to the conclusion that when Abel was blessed, there could be no blessing for him.

What is decisive is that when Cain’s offering was rejected, or he thought it was, he embroiled himself with Abel, which was also to exile God. God called out to Cain, something God continues to do with violent humans to the end of time, but Cain would not let go of his preoccupation with his brother until he had killed him.

Afterwards, Abel’s blood cried from the ground. This is a marked contrast with the fratricidal myth of the founding of Rome where the blood of Remus was silent. Like Romulus, though, Cain was a founder of culture while Abel was the first prophet as defined by Jesus in Mt. 23:35, that is, a prophet is a victim. Abel’s blood seems to have cried for vengeance. The author of Hebrews, however, says that the blood of Jesus “speaks a better word than the blood of Abel.” More proof that God is in the business of blessing and not cursing.