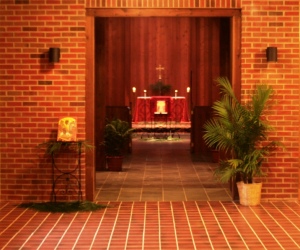 Jesus encounters the ten lepers between Samaria and Galilee. Luke often uses geography to point to a spiritual landscape and this is a particularly apt example. Jesus meets ten marginal people in a marginal space. The broader geography is that Jesus has “set his face” to Jerusalem, the center of meaning and power, where he will be crucified.

But some outcasts are cast out more than others. One of the lepers was a Samaritan who would presumably be marginalized by his marginal companions. Sort of a double whammy.  In this marginal place, Jesus tells the lepers to go to the center of power, to the very people who have declared them unclean, for validation that they are clean. I can’t help but suspect that Jesus was being sarcastic, grumbling at the lepers to find out how they really want to be “healed.” When they suddenly find themselves clean, only the marginalized Samaritan returns to Jesus, who is still standing in the marginal space. That the other nine would go straight to the priests, at the center of power, is the strongest indication of how the Samaritan was treated by them. The Samaritan was healed, not only of leprosy, but of the social and religious system that required that some people be declared unclean so that others can be “clean.” This is the healing that the other nine former-lepers miss out on.

Jesus and marginality come up so many times in the Gospels, giving us the occasion to preach about it many times, that it starts to sound like a cliché. Instead of falling asleep, we need to wake up and really listen. Surely the Gospels hammer this theme so many times because we need to be healed of being hard of hearing.

This story prompts us to reflect on what we do when we find ourselves in marginal positions, having been cast out and declared unclean in some way. Do we band together with other outcasts in a constructive way? Or do we band together in resentment at the establishment? Does our little outcast group amount to a mini-establishment with people divided between clean and unclean? Do we run back to the establishment that exiled us if we get a chance to do so?

That only the Samaritan returned to Jesus to thank him raises the question of what causes gratitude and what hinders it. I suggest that a system that divides people between clean and unclean inhibits gratitude. When we live with this kind of mindset, we inevitably feel entitled to our advantages and delude ourselves into thinking we have earned them. We also inevitably feel that lepers have “earned” their marginalization. If returning to the center of power is what we want, then gratitude is the last thing we feel if we manage to do just that.

Of course, the Samaritan had to advantage of not having the same option of going to a priest to be declared clean as his fellow lepers did. Being cleansed wasn’t enough to take him out of the margins. Remaining in the margins gave him the opportunity to give Jesus another look and let Jesus be the one who decides if he is clean or not. Giving Jesus this sort of authority is an exhilarating thing to do. It is also dangerous. Jesus just might tell us that not only is each one of us clean, everybody else is also clean and we have to live without our lepers.