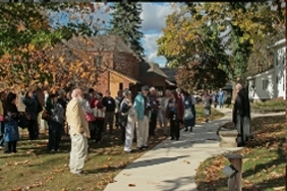 All Saints is a feast for all of us. Does this mean we are all sanctified in the sense of perfected in Christ? No, but it is a feast that celebrates the true glimpses of Christ that others have given us. What does Christ look like in the actions and bearing of those people who have had an effect on us?

The Beatitudes in Matthew give us a sense of direction and a daunting one at that. Hungering and thirsting for righteousness, being merciful and making peace are clear signs of sanctity in the sense of imaging Christ who was and is all of the above. But what about meekness? What is so holy about that? In this context, meekness seems not to be about obsequiousness, which is not holy, but about being out of the loop of the power brokers. Being poor goes with meekness in this respect. Being poor and meek does not guarantee that one will image Christ and it is important not to trash the movers and shakers out of resentment. Jesus did not resent the young rich man’s wealth; he felt sorry for the guy because that wealth prevented him from becoming a follower. By adding the phrase “in spirit” to being poor, Matthew gives us a loophole that Luke’s version doesn’t. A rich and powerful person can be a saint if that person is willing to be a peace maker and merciful and to thirst after righteousness.

Being pure of heart so as to see God is an inner virtue. In his Epistle, John says that “what we will be has not yet been revealed” but when it is revealed, “we will be like [God], because we will see him as he really is.” (1 Jn. 3: 2) One of the fundamental things that purity of heart means is being empty of self so as to give room for God. This is a big part of what being “poor in spirit” is all about. The more we see God, the more visible God will be to others who see us.

Being persecuted and hated and reviled on Jesus’ account is not something that we normally think of as a blessing, but if we thirst for righteousness, we will prefer to be vilified than to be praised for betraying our principles. Making peace, or trying to, is a good way to make enemies. The poor and meek are targets for persecution because they are vulnerable. In Revelation, John the Divine assures us that when we come through such ordeals, we will be given white robes and will be among the pure in heart celebrating before the Lamb who was slain. (Rev. 7: 14)

Many have suffered badly at the hands of people in the Church. Many of those who came through “the ordeal” suffered it not from pagans but from fellow Christians. Such suffering that amounts to scandal can make some of us think there are no saints in the church. Elijah thought he was the only faithful person left in Israel until God told him of seven thousand prophets who had not bent their knee before Baal. Likewise, the uncountable multitude of people from all tribes, languages and nations shows us that there have been and are many saints than we sometimes think.

In my own life, four such come to mind most prominently. During my college years, my parents transferred to an Episcopal Church they thought would be more responsive to our pastoral needs than the one we left. It was. I visited the rector of this church every time I came home for vacation. He listened generously to everything I said although much of what I said was outrageous. His kind listening made it easier for me to see through my silliness than if he had called me out on it. Meanwhile, at college, I had a religion professor who not only taught me how to think theologically, but was a model of gentle listening and gentle prodding to nudge me in better directions of thinking. At the abbey, I was nurtured by a novice master who was one of the most self-effacing people I have ever known, self-effacing to a fault that some people take advantage of. He gently provided the space for me to grow as a monk. During a tough time at the abbey, we had an oblate who was like a grandmother to many of us. She couldn’t solve any of our problems but she could listen and encourage us and strengthen us to seek constructive solutions. None of these people cared about making waves in the world; they were content to be themselves. Let us celebrate this feast by remembering the saints that the “world” may not know about but we do.