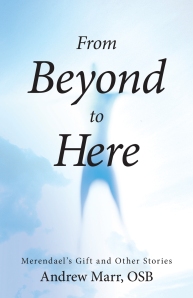 I just received a review of From Beyond to Here from BlueInk. Check it out and buy the book if you haven’t already.

BlueInk Review: From Beyond to Here

For many in North America, Halloween is a day for children to dress up, have fun, and get lots of candy from indulgent neighbors. Skeleton suits and witch’s makeup are all in fun. Not as fun is the background to Halloween that goes back to rites, such as the Celtic Samhain festival, designed to allay anxiety over blurring the distinction between the dead and the living and make sure the dead stay dead. This anxiety causes some people to try to suppress modern Halloween, although the people who sentenced witches to burning should be more horrifying than girls running about in black dresses with candy bags.

Blurring distinctions between the living and the dead raise horrifying issues. To begin with, it calls into question what life and death really are. Zombies and vampires are very popular today as creatures haunting us with this blurred distinction. The idea of being “undead” is a haunting but unattractive possibility.

Rites of and against the dead, encountered by anthropologists worldwide, express fear that the dead envy the living and, if they get a chance to break into the land of the living, they will destroy the life we cherish. That is, the dead are set up as rivals for life that has been made scarce. These anxieties project rivalry experienced with other living persons on those same persons when they are (hopefully) departed this life. Cf. “Human See, Human Want.”

The execution of Jesus followed by his Resurrection, where Jesus appeared not as a vengeful ghost but the forgiving victim, opened up a whole different paradigm of the dead. Christian martyrs who gave up their precious lives to witness to Christ were believed by the early church to be, not vengeful ghosts, but saints in Heaven actively seeking our good. Dante’s Divine Comedy is a particularly powerful vision of those living on earth and those living in Heaven supporting each other in prayer without resentment or rivalry. Cf. “Two Ways of Gathering.”

Many people like to have their spines titillated at Halloween. My stories “Ghost of Swiss Castle” and “The Dark Window” in Beyond to Here might chill the spine a little bit, but they also invite the reader to think of lending a ghost a helping hand and receiving some healing in this life as well.