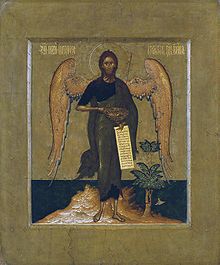 Although John burned with a conviction that God was going to do something new, he had only the models of past prophets to guide him in opening a way to the great new thing. He lived in the desert, wore a camel hair coat and ate wild locusts and honey in imitation of Elijah. Like the prophets of the past, he warned the brood of vipers of the wrath to come if people did not shape up and turn back to God. (Lk. 3: 7) Again like the prophets, he told soldiers not to oppress vulnerable people. Yet again like the prophets, he rebuked his ruler, Herod. And like so many of the prophets, he was put to death.

In John’s time, baptism was established as a custom for cleansing converts. John gave it a new twist by insisting that his fellow Jews needed to be converted as much as the Gentiles and so were in need of being baptized. This was a prophetic action to dramatize God’s word. Today we call it guerilla theater. The teaching dramatized in this novel way was traditional: the people should return to the Lord who will purify them of their sins.

John defined himself through the words of Isaiah by quoting Isaiah’s prophecy of a new pathway of the Lord. (Is. 40: 3) The pathway through the desert that Isaiah was prophesying was for the return of the exiles from Babylon to Jerusalem, a great new thing God was doing in Isaiah’s time. In quoting these words, John was announcing that God was going to do yet another new thing, something God had never done before.

For John, this new thing was focused on a person who was to come. John believed that Jesus was this person when he came to the river. But John was confused about him, and not for the last time, when Jesus insisted on being baptized although John thought Jesus was the one person who didn’t need it.

When he was in prison by order of King Herod, John had doubts about Jesus and he sent two followers to ask Jesus if he was the one he was expecting. It seems odd that the healing miracles John’s disciples had just reported should cause doubts, but a ministry of healing was beyond the scope of John’s own ministry. Typically, Jesus did not answer the question, but pointed to his healings and said “ blessed is anyone who takes no offense at me.” (Lk. 7: 23) Given the fiery rhetoric of John’s own preaching, the sentiments of the Sermon on the Mount may also have been confusing to John.

John knew that his prophetic ministry was fading. In such a situation, most people fight back and try to regain the upper hand. René Girard suggests in The Scapegoat that John denounced Herod’s marriage not so much on legal grounds but because of the rivalrous action of taking his brother’s wife. This realization would have made John all the more cautious about rivalry on his own part and caused him to take Jesus’ admonition to avoid offense to heart, as offense is the spark that flames rivalry. John managed to renounce rivalrous behavior to the extent of saying that Jesus would increase while John would decrease. But did John know what he was renouncing rivalry for? Did John ever get an inkling that the greatest new thing God was doing in Isaiah’s time was not returning the exiles to Jerusalem but raising up a person who accepted disgrace, torment and possibly death without retaliating in any way? On reflecting on Jesus’ insistence that he be baptized, did John finally realize that Jesus was taking on the sins of the people as did Isaiah’s Suffering Servant, which would make Jesus the “lamb of God?” Most Bible scholars think it unlikely that John arrived at these insights and they think the evangelists wrote them into the narrative to elucidate John’s place in relation to Jesus. Maybe. But John obviously thought long and hard about his own vocation in relation to Jesus and he was outspoken enough to cry out glimpses of insight he still did not understand.

In our time we may think we know what John was pointing to even when John didn’t, but we do well to ponder why, in her infinite wisdom, the Church gives us a liturgical year that begins with Advent where John the Baptist is prominent. Why have a season to look forward to what we know we are looking forward to? Maybe we are more in the dark about what it means for Jesus to be the Lamb of God than we think we are. Maybe we still don’t really know what great new thing God has done and what greater thing God will do. Maybe we have a lot more to look forward to than we know.