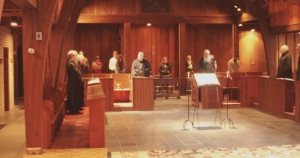 The reality of mimetic desire guarantees that we will engage in liturgical activity. What kind of liturgical activity and for what end leads to many possibilities. However, since we instinctively react to the desires and intentions of others, we also instinctively move and sing with each other and act together. Since we are mimetic animals, we are also liturgical animals. Much liturgy takes place in churches and temples but liturgy can be done anywhere at any time and it is indeed done all over the place. René Girard’s theory of scapegoating violence places the origins of ritual and liturgy in the spontaneous mob violence against a victim that “solves” a massive social crisis. At first thought, one would think there is nothing liturgical about collective violence; it just happens. But actually collective violence is a very predictable phenomenon that consistently works in a certain way once it gets started. We all know that once the persecutory ball gets rolling it is almost impossible to stop until blood has been spilled. The relatively few instances where the persecutory wave is stopped short of bloodshed also follow a predictable pattern. In essence, the mimetic contagion of a mob has to be redirected into another direction, one less destructive. This is what Jesus did when the Jewish elders were gathered around the woman caught in adultery. This is what Christians do to this day when celebrating the Holy Eucharist. Although I think it likely that sacrificial rituals have their origins in collective violence as Girard suggests, I think that ritual in itself is rooted more deeply in human nature. Since we humans are imitative creatures, we would instinctively coordinate our bodily movements with those of others. This sort of mirroring is instinctive to mothers especially in their interactions with their babies. It is this coordination of movement that would unify a family and then a clan and then a tribe. These coordinated movements would naturally turn into communal dancing and singing. Such coordinated action would naturally move into reenactments of primal collective violence once that occurred, but there is nothing in this instinct for coordinated movement that requires that it move in that direction. This is to say that collective violence and its continuations in sacrifice and institutionalized violence are not of the essence of humanity. There is nothing necessary about it; it’s just something that happens most of the time. What is necessary in the sense of being of the essence of humanity is coordinated movement. Our built-in mimetic desire guarantees that it will happen. There are practical reasons for this trait, among them coordinating movements during hunting expeditions, the way soldiers do military drills to facilitate coordination in battle, and the way football teams synchronize their actions, not to speak of the rituals performed by their fans. Singing together over common work such as gathering fruits and preparing meals might not be as necessary for success as the coordinated movement of hunting parties, but perhaps are as necessary at another level. Maybe nobody dies of boredom but we often feel that we can, and maybe we do in the sense that lack of interest in life isn’t conducive to living a long life. It is singing and dancing together and moving together in other ways that would have given our earliest ancestors an interest in living and it is these activities that spark our interest in life today. Many people today may think they are dismissive of liturgy because they think of stuffy church services or masonic rituals. But the ways we greet people, especially when introducing people to strangers or meeting them, are little rituals that we take so much for granted that we don’t think of them as rituals. When I was young, many people who never darkened the door of a church linked arms in the streets and sang the hymn “We Shall Overcome.” All this is to say that humans are liturgical animals. Gathering with others always has some liturgical overtones in the sense of repeating actions we are used to doing together. Drinking parties tend to follow the same patterns for those groups in the habit of gathering for that purpose. Given this human trait to gather through ritual, it is inevitable that any who wish to gather with others in memory of Jesus would gather liturgically. Liturgy is discussed at length in my book Tools for Peace.