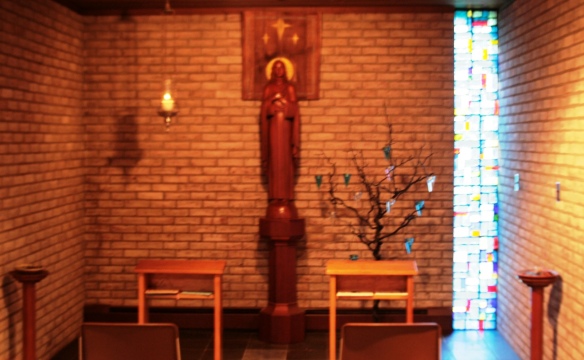 Back when I was a seminarian at Nashotah House, a student from the South transferred there in the middle of the academic year. Not surprisingly, given Nashotah’s Anglo-Catholic tradition, several students ganged up on him and tried to convert him to an ardent devotion to Our Lady. This student’s response was: “I thought Mary was just a little Jewish girl.”

Not surprisingly, this student never got into rosaries or other Marian devotions. For myself, young and zealous over the Anglo-Catholic way but cautious about going as overboard as some of my classmates did, I was bemused by the remark and it has stuck with me. As I think about it now, I am convinced that this student’s remark, surely meant to be dismissive, was spot on. Mary was a Jewish girl, and if we want a sound Mariology, we are wise not to forget it. In fact, when we look at the Gospels, we see a Jewish girl who said very little, although she pondered much in her heart.

Some of the overblown piety directed at Mary has been enough to make one forget she had ever been a human being, let alone a humble girl from a humble Galilean village. The Gospel canticle known as Magnificat, which was read for today’s Gospel, has this little Jewish girl flinging the mighty from their seats and scattering the proud in the imagination of their hearts. Maybe this little Jewish girl took some Judo lessons and got herself a black belt. Then the paintings of Mary’s Assumption into Heaven and her coronation there make her look something like a goddess. Many devotions to Mary suggest that she is the vehicle of salvation and either her son is just an afterthought, or he just as stern and unapproachable as his heavenly father. This little Jewish girl sure rose up in the world.

However, if God was going to send His Son, born of a woman, at the “fullness of time,” (Gal. 4: 4) a woman would gave to give birth to him. If Jesus was going to be born a Jew, then his mother would have to be a little Jewish girl and not a goddess organizing the heavenly realms. Jesus would not have been fully human otherwise. As a baby and little boy, he needed to be cared for by his mother and adoptive father. Nothing unusual there. What was unusual, to the point of being earthshaking, as the Magnificat proclaims, was that God had entered human nature so that this human mother was not only the mother of a human boy but the Mother of God! So it is that in the Magnificat, it isn’t Mary who is throwing the bad guys around; it is God raising up a little Jewish girl and, with her, the whole human race, little old me and little old you included.

3 thoughts on “Just a Little Jewish Girl: A Homily for the Feast of St. Mary the Virgin”