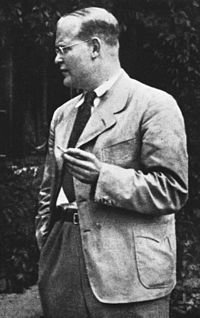 Passiontide is an appropriate time to reflect on the life and witness of Dietrich Bonhoeffer. Charles Marsh’s book A Strange Glory is a great resource for this.

This beautifully-written book is as gripping as a novel in the way it brings the reader inside a man who was a precocious and amiable spoiled brat for much of his life, but then shunned the safety & comforts of New York to serve his stricken country and was hanged after spending roughly two years in a Gestapo prison.

This book has gained some notoriety for “exposing” Bonhoeffer’s homosexuality. The intense passion that Marsh finds in B.’s letters to Eberhard Bethge seem likely to be strengthened by sexual passion. Bethge himself shows only friendship in return. At the time when he was directing the underground seminary in Finkelwalde, at which time B. met Bethge, we can see the combination of intellectual brilliance and serious emotional immaturity on the part of B. that led to a crush on his student. Marsh is convinced that this relationship never reached sexual activity.

B. was among very few theologians who saw through the distortions of Nazism. In Marsh’s account, I see the roots of that from B.’s critical stance to his theological inheritance that co-existed with respect for his mentors such as Harnack. His very first academic thesis criticized the role of Hegelian idealism in the German theology of his time. B. was mentored by Karl Barth, who, although the greatest theologian of his generation, was shunned by the German establishment. B. did not become a Barthian either, though. B. continued to work at diagonals to the adademic establishment. A year in the US, at which time he worshiped at the Abyssinian Baptist Church in Harlem seems to have alerted B. to the dynamics of persecution in his own country. As Hitler pressured the Evangelical Church of Germany to fall in line with Nazi principles, it was an obscure professor with no paying position to speak of, who became the most significant protesting voice.

The greatest enigma about B. is how a pacifist theologian could participate in a plot to assassinate Hitler. Marsh proves the matter deeply and shows that the matter is highly ambiguous. B.’s work for the resistance consisted of diplomatic outreach to the WCC & Anglican bishops in what turned out to be a vain hope for support from the allies for the Resistance. As for the matter of assassination of Hitler, B. seems never to have resolved in his mind whether or not it was the right thing to do.