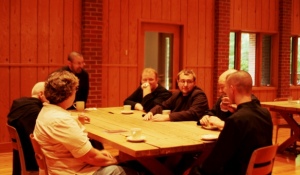 The best-known image of the Church in the New Testament is the analogy of the human body with the Church which is the Body of Christ (1 Cor. 12:12-28). The implication is that as the various parts of a body add up to a unity, the various members of the church, different as we are, also make up a body. This analogy suggests each part must be well-coordinated with all the others. We can see this readily—and impressively—in athletic maneuvers such as acrobatics or in the artistry of a ballet dancer or musician. This image suggests a deep intuition on St. Paul’s part into mimetic desire. Just as each part of the human body must be sensitive and synchronized with each other, so must each member of Christ’s Body resonate with one another. As with the body, this resonance needs to be preconscious, an ongoing awareness of and sensitivity to the other members. The most essential elements of this sensitivity are accepting the other members and not overstepping limits. St. Paul says one part cannot say it doesn’t need another part. His extension of the analogy to a list of various ministries in the church makes it clear that if a foot wants to be a hand, the body won’t walk very well. Neither will the body work well if a foot is amputated. These destructive outcomes happen if the parts of the body fall into mimetic rivalry. The comic character Bottom in Shakespeare’s Midsummer Night’s Dream is a perfect example of overstepping boundaries. At the rehearsal of the play to be performed before the Duke’s court, Bottom first accepts the part assigned to him but then demands every other part as it is doled out to the cast. The absurdity of Bottom’s demands is clear enough if we try to imagine him doing all the parts in the play himself. It is the same absurdity if the neck tried to do all the walking.

Another image of the Church comes in the First Epistle of Peter. The author envisions the community of Christ as a “holy house” made out of “living stones.” (1 Pet. 2: 5) This image reminds us of St. Paul’s admonition that individually and corporately we should each be a Temple of God. (1 Cor. 3:16) It is significant that Peter calls the building a house and not a temple although it is a place where priestly ministry takes place. I see here a hint that Christ’s household is not a place set apart but a place for everyone, sort of like the City of God that doesn’t have a temple because the whole place is one. We have a sense of unity-in-diversity in this image as well. There are many stones and each has to be in its proper place or the house collapses. The stones are not inert but living, vibrant. Again each living stone should resonate with all the other living stones, another powerful image of mimetic desire working constructively.

Another biblical image that I don’t recall seeing used as an image of the Church, but one that could be, is that of the vine and the branches (John 15: 1-9).Here, we are all to be connected with one another through our rootedness in Christ. This image stresses our resonance with the Desire of God but also our connectedness with others through God’s Desire.

These images of the Church complement one another. The Body of Christ has possible pantheistic overtones if taken too far so that the distinction between us and Christ is blurred. But we are, all of us, called to act the part of Christ in the world. The body is dynamic. It can be still for a time to meditate, but usually it is going places and doing stuff. This body and should go out and minister to people in need. The image of the holy house made of living stones is more static. The dynamism is in the living stones while the building stays in one place. This holy house is to be open for the Holy Spirit to fill it and just as open for people to enter and be in it. That is, we are to be living stones creating a loving environment of hospitality for all. The image of the vine and the branches is the most contemplative. While the other two images emphasize the relationships between the members, the image of the vine and the branches emphasizes the grounding of all members in God. It is an important corrective to the pantheistic pitfall of the Body of Christ image.

In themselves, these images are inspiring ideals. The reality is something different. St. Paul himself knew this full well. Just before presenting the Church as the Body of Christ, he had castigated the Corinthians for their disorderly and exclusionary suppers where some gorge themselves in front of their poorer and hungrier brothers and sisters. This same epistle began with Paul’s outrage over the divisions within the church with its party slogans that reinforced the divisions. Likewise, Luke’s claim that “the whole group of those who believed were of one heart and soul, and no one claimed private ownership of any possessions, but everything they owned was held in common” (Acts 4:32) was wishful thinking as the subsequent story of Ananias and Sapphira makes clear. Rather than throwing out these images as unrealistic, we need to keep them before us as models we constantly fail to live up to. Without these images, we would just act like the Corinthians without a second thought. We will have to look again at the reality in relationship to these ideal images.

Then there is the matter of the stones. These living stones aren’t just any stones. The cornerstone had been rejected by the builders. What does this mean for the other living stones we are supposed to be? That is another question for further reflection.