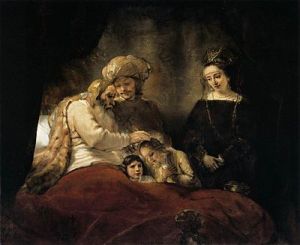 [Continuation of Mimetic Blessing through Abraham (1): Cain and Abel

God promised Abraham that he would have as many descendants as the dust of the earth. (Gen. 13:16) I like the later image of the stars in the sky and the grains of sand on the seashore (Gen 22:17) but the earlier image ties in with the creation of humanity out of dust, thus making it clear that descendants of Abraham (like us) are part of God’s ongoing creation. That’s how expansive God’s blessing and being God’s blessing can be.

When Abraham and his nephew Lot found there was tension between their herdsmen, Abraham suggested that they separate and he gave Lot the choice of taking the land to the left or the land to the right. This is quite the opposite from what most of us do which is the first see what the other desires and then desire it for ourselves. Instead, Abraham renounces desiring what his nephew desires and goes in the other direction. (The better-looking land turned out to have its liabilities but that is another story.)

Unfortunately, Abraham does not renounce mimetic desire and rivalry when it comes to his sons Ishmael and Isaac. In spite of being called to be a blessing and promised as many descendants as the dust of the earth, Abraham fails to believe that both of his sons can inherit the blessing he has been given by God. Far from fighting each other, Ishmael and Isaac play well together but they fall victim to the rivalry between their mothers. (Women are equal participants in the mimetic rivalry game in Genesis.) Abraham casts Ishmael out so that his favorite son born of Sarah can inherit the blessing. God, however, makes it clear that there is a blessing for Ishmael, too, even if Abraham did not believe it.

Following his father’s example, Isaac assumes that only one of his two sons can receive his blessing and, like Abraham, he wants to give it to his favorite son. Rebekah’s involvement in this rivalry causes this Isaac’s scheme to misfire. This time, it is the son who receives (takes) the blessing who is exiled where Jacob spends many years in rivalry with his kinsman Laban. When Esau re-enters the story on Jacob’s return, we can see that Esau has done well for himself and has no need to envy his brother’s success. Apparently there was a lot more of a blessing left for Esau than Isaac thought.

Jacob stubbornly upholds the family tradition of disbelief in the scope of God’s blessing and singles out his favorite, Joseph, over/against his ten older brothers. This time the fratricidal strife has enough brothers to create a scenario of collective violence. In contrast to the primitive sacred, however, the unanimity is not complete. Both Reuben and Judah, separately, make plans to save Joseph but they both fail. If they had stood up to their brothers, the mimetic process would likely have been redirected in a peaceful direction. The upshot of the story is that Joseph ends up becoming a blessing to Egypt and to lands far beyond and he saves his own family through his foresight in collecting food during the years of plenty. (Joseph’s making the Egyptians buy back the food that had been taken from them does make Joseph less generous than his God.)

Before he dies, Jacob blesses the two sons of Joseph: Ephraim and Manasseh. He crosses his hands to indicate that Ephraim will be greater than his elder brother, but he gives both boys the same blessing. Finally, through excruciatingly painful experience, Jacob has learned that God has blessings for all of Abraham’s offspring.