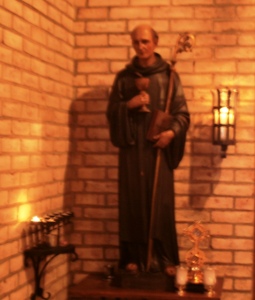 St. Benedict, as portrayed in the Dialogues of Pope St. Gregory I, is an imposing figure, performing miracles with the flick of the hand or the eyes. The St. Benedict we see in the Rule composed by him is rather ordinary, even boring. That’s okay with Benedict; he wasn’t trying to be anyone special. He was a man devoted to a life of prayer in community who was put into a position of leadership and the responsibilities that entails. He wrote a Rule for his community to give some spiritual teaching and practical guidelines. A lot of abbots had done the same. Benedict cribbed much of his own Rule from one of the monastic rules lying around. He probably didn’t expect it to be remembered for long except in the eyes of God. That’s all that really mattered to him.

The document Benedict drew from is an interesting contrast to Benedict’s Rule. It is called The Rule of the Master, authorship unknown. The Master seems to have thought that he was writing the ultimate rule to end all monastic rules. Everything in this ideal community was in place and nobody would need to write another rule. For every sort of delinquent behavior the Master could think of, he composed a perfect speech to remedy the problem so that no abbot would be at a loss for words no matter what happened. (Hah!) Benedict didn’t think so. He didn’t bother to write a critical review of the Rule of the Master; he just took material that he found useful, much of it actually cribbed from John Cassian, and left out the rest. The silences were deafening. No endless lectures on overcoming monastic vices for one thing. No pulleys lowering baskets at mealtimes to indicate that the bread came from heaven for another. There are loose ends everywhere so that any abbot using this rule can improvise according to the time and place and the weaknesses and strengths of the monastics in the community/

What we’re left with is a document so short that it makes for an ideal book report if shortness of book is the main issue.  There is spiritual teaching about listening to God in silence and in the Divine Office. There are verses urging us earnestly to run in the way of God’s commands and cautions about being humble by putting oneself constantly in God’s presence and never forgetting it. There is much about worshiping with care and doing humble chores with equal care, to the point of treating the tools of the monastery as if they were the vessels of the altar. There are also admonitions for treating the other members of the community and guests with care, perhaps suggesting that they, too, should be treated as the sacred vessels of the altar.

There’s nothing out of the ordinary. Anyone can do it. Benedict said it was a rule for beginners. There’s nothing about doing fabulous miracles like the disciples or attributed to Benedict in Gregory’s life. The monastic life isn’t about healing the sick, but it is about tending the sick to give them the best chance of being cured. It isn’t about casting our demons except to build up a community life that doesn’t give demons much room for maneuver. It isn’t about raising the dead except to give of oneself to improve the quality of life for others.

One thing Benedict does accomplish in his Rule that the disciples accomplished was the miracle receiving freely and giving freely. Benedict freely received the tradition of the Gospels, the Sayings of the Desert Monastics, the writing of John Cassian derived from the Desert Monastics, and the fussy Rule of the Master that would be forgotten if it weren’t for Benedict. All this, Benedict has freely given to us to guide us in ordinary lives of prayer in community.