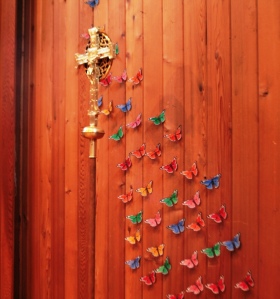 Here is my favorite thought experiment: Imagine that everybody around you ganged up on you, leveled incredible accusations against you, and rained savage blows on your body. Your friends either joined in the persecution or slunk away, too afraid to defend you. Your attackers pressed on until they had put you to a most painful death. Imagine further that, miraculously, you found yourself alive three days later. Having already died, you could hardly die again. You have become invincible. What would you do to the people who had mistreated you? How would you approach your cowardly friends?

Perhaps this thought experiment can give us an inkling of how amazing it is that, when this very miracle happened to Jesus, he did not retaliate, but instead, invited everybody to a big whooping party that will never end. After rising from the dead, Jesus continued to do what he was doing before he was killed: gather God’s people in peace by peaceful means only. That is, after his Resurrection, Jesus practiced what he preached in the Sermon on the Mount: return evil with good, hatred with love. The fullness of Jesus ‘forgiving love can be as earth-shattering as an earthquake or as gentle as stepping through a wall.

If Jesus were dead and there was a body in the tomb for the women to anoint, chances are that Jesus’ disciples would either have remained in hiding or they would have reacted to the violent act of the crucifixion with violence. But in Luke the young men in white asked the women: “Why seek the living among the dead?” That is, God did not will the death of Jesus, God willed life for Jesus because that is what God wills for each one of us. As long as we stop at Jesus’ death, we also stop at the grief and anger and that leads to violence. If we move on to the life of Jesus, than there isn’t the same room for grief and anger because Jesus is alive and wants us to be alive in Him.

In short order, Peter passes on the same absence of revenge of Jesus’ persecutors and fullness of forgiving love for them when he tells the people in Jerusalem precisely what they had done, sticking to the bare facts and not adding irrelevant insults the way we usually do in such situations. When Peter’s listeners were “cut to the heart” and asked: “What should we do?” Peter extended the invitation that he and the disciples had received from the Risen Lord: “Repent and be baptized every one of you in the name of Jesus Christ so that your sins may be forgiven; and you will receive the gift of the Holy Spirit.” This is a far cry from the response we get from most followers of a slain leader. Peter had heard the cock crow, repented and accepted Christ’s forgiveness and love. Peter was a weak human being like the rest of us. If Peter is like us, we can be like him.

See also Two Ways of Gathering and Violence and the Kingdom of God.

2 thoughts on “A Risen Life Full of Forgiveness and Love”