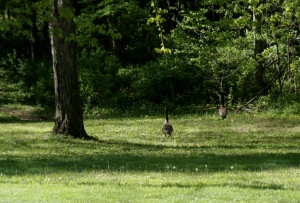 We often think of a prophet as a person who speaks the word of God such as Elijah and Isaiah do, but Jesus gives us a deeper definition of what a prophet at the climax of his diatribe against the scribes and Pharisees in Mathew: “so that upon you may come all the righteous blood shed on earth, from the blood of righteous Abel to the blood of Zechariah son of Barachiah, whom  you murdered between the sanctuary and the altar.” (Mt. 23:35) Here, the prophet is one who says not a word but speaks the Word of God nonetheless in the sense that Abel’s blood cries from the ground.

This diatribe is often cited as a proof that Jesus, at least at times, was violent. It is worth noting, however, that Jesus didn’t shoot an automatic rifle at anybody; he spoke truth to presumptive power with a two-edged sword for a tongue. More importantly, these harsh words are followed by Jesus’ wish that he could gather his “children together as a hen gathers her brood under her wings.” Here we see very clearly the Two Ways of Gathering outlined in my blog post of that title.

In Luke, the lament over Jerusalem is put in a different, but similar, context. Warned by some Pharisees that Herod wants to kill him, Jesus calls him “that fox.” (Lk. 13:32) In preaching on this Lukan text, Prior Aelred here at St. Gregory’s, drew out the comparison of the fox and the hen. In the face of a threatening fox, Aelred suggested that Jesus might have been a better protector by being a tougher animal, such as the Lion of Judah. But no, Jesus assumed the role of a vulnerable hen gathering her chicks. Aelred went on to extoll Vicki Soto and her colleagues at Sandy Hook who covered as many of their small pupils with their bodies as they could to protect them, a contemporary embodiment of Christ the vulnerable, protective hen.

A fox scatters, while a hen gathers. What if Jesus had chosen to be a lion to deal with that fox Herod? It occurs to me that a lion would scatter all foxes who might threaten the chicks. Sort of like a superhero crushing the bad guys so that good guys like us can get on with our lives. Aelred noted that Jesus the Hen is not a popular image in Christian lore as is the Lion of Judah. The problem is, if Jesus the Hen gathers, then not only is Jesus the Hen trying to gather the scribes and Pharisees,  but Herod and his court as well, thus robbing us of more favorite enemies.

3 thoughts on “The Prophet Between the Fox and the Hen”